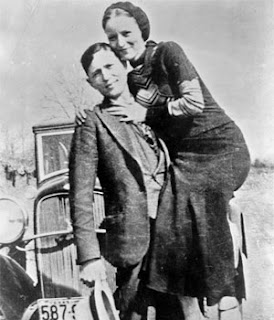 Bonnie and Clyde were American criminals who traveled in  United States during the Great Depression, robbing banks and generally causing chaos. They were responsible for more than thirteen murders, and bank robberies that are too many to count.

Bonnie Parker was born on October 1, 1910 in  Texas. She was fond of creative writing and the arts, and her poem The Story of Bonnie and Clyde .

Clyde Barrow was born on March 21, 1909, in again Texas as one of many children in a poor farming family. His life of crime began when he was arrested in 1926 for auto theft.  After meeting Bonnie in 1930, he was arrested and taken to prison. His  escape plan  was only partially successful--he was free for a week before being caught --and so Clyde remained in jail  until for 2 years.
After his release, he and Bonnie stole a car in Texas. But When they were caught , Clyde escaped and Bonnie went to prison for a few months.
The duo became the leaders of a small group of like-minded criminals. They called them Barrow Gang . Clyde's brother  and his wife  were also the members of the group. But after awhile , His Brother was killed and his wife captured.
They were among the first celebrity criminals of the modern era.  Bonnie's poem, The Story of Bonnie and Clyde, was published in several newspapers.
In 1967 Arthur Penn directed a rather romanticized movie version of the story,
In 1967, Arthur Penn directed a rather romanticized movie  version of the tale. Bonnie and Clyde, which starred Warren Beatty and Faye Dunaway, was critically acclaimed   to be a more glamorous image of the couple .

The Story of Bonnie and Clyde
You've read the story of Jesse James
Of how he lived and died;
If you're still in need
Of something to read,
Here's the story of Bonnie and Clyde.
Now Bonnie and Clyde are the Barrow gang,
I'm sure you all have read
How they rob and steal
And those who squeal
Are usually found dying or dead.
There's lots of untruths to these write-ups;
They're not so ruthless as that;
Their nature is raw;
They hate all the law
The stool pigeons, spotters, and rats.
They call them cold-blooded killers;
They say they are heartless and mean;
But I say this with pride,
That I once knew Clyde
When he was honest and upright and clean.
But the laws fooled around,
Kept taking him down
And locking him up in a cell,
Till he said to me,
"I'll never be free,
So I'll meet a few of them in hell."
The road was so dimly lighted;
There were no highway signs to guide;
But they made up their minds
If all roads were blind,
They wouldn't give up till they died.
The road gets dimmer and dimmer;
Sometimes you can hardly see;
But it's fight, man to man,
And do all you can,
For they know they can never be free.
From heart-break some people have suffered;
From weariness some people have died;
But take it all in all,
Our troubles are small
Till we get like Bonnie and Clyde.
If a policeman is killed in Dallas,
And they have no clue or guide;
If they can't find a fiend,
They just wipe their slate clean
And hand it on Bonnie and Clyde.
There's two crimes committed in America
Not accredited to the Barrow mob;
They had no hand
In the kidnap demand,
Nor the Kansas City depot job.
A newsboy once said to his buddy;
"I wish old Clyde would get jumped;
In these awful hard times
We'd make a few dimes
If five or six cops would get bumped."
The police haven't got the report yet,
But Clyde called me up today;
He said, "Don't start any fights
We aren't working nights
We're joining the NRA."
From Irving to West Dallas viaduct
Is known as the Great Divide,
Where the women are kin,
And the men are men,
And they won't "stool" on Bonnie and Clyde.
If they try to act like citizens
And rent them a nice little flat,
About the third night
They're invited to fight
By a sub-gun's rat-tat-tat.
They don't think they're too tough or desperate,
They know that the law always wins;
They've been shot at before,
But they do not ignore
That death is the wages of sin.
Some day they'll go down together;
And they'll bury them side by side;
To few it'll be grief
To the law a relief
But it's death for Bonnie and Clyde.
-- Bonnie Parker
Թողարկված է Nanor Hovhannisian
Email ThisBlogThis!Share to TwitterShare to FacebookShare to Pinterest